My Pegasus2 R4 will no longer fall into standby / sleep mode when my iMac with macOS Catalina 10.15.3 goes into standby. It worked fine some weeks ago but lately - probably after updating the pegasus firmware - I noticed this issue. Maybe someone had the same problem and knows some advice? I appreciate any help.

As much of us, my access to the Pegasus 2 R4 is no longer possible.

Please let me know what can of help can I ask, or what to expect about new drivers o utilies. Everything es locked and the drive doesnt mount .

Best regards and thanks in advance for any answer

For any given solution that worked, many other commenters will say that it did not work for them.

Some say that after trying a lot of stuff, it was fixed, but they don't know what exactly it was that fixed it.

Some threads go back for years, and some commenter will say something like, updating to Mountain Lion fixed it, then the next year or so a comment by the same user says that it's back after upgrading to Mohave.

It's a complicated issue and I really wish there was some single solution that would fix everything, but that does not appear to be the case.

OK, I will post here, if I find something usefull.

Thanks for your reply R P.

Bastian, if you post something over in the Apple forums, maybe you could post to it here, just so I can follow your post over there. I'll do the same if I beat you to it.

thank you for your reply. OK, I will try to find out a solution on the OS side of the problem.

If you check Apple's forums and other forums, there are many people looking to solve issues like this. But this is a macOS issue.

Regarding Arvid's screenshot, I would uncheck the box saying Prevent computer from sleeping.

I have the same issue with my Pegasus2 R6: NO SLEEP

I have the same issue with my Pegasus2 R4 and macOS 10.13.6 running on a Mac Pro (Late 2013). The computer goes to sleep, the Pegasus also goes to sleep, but only for a few seconds, then the Pegasus starts up again. Then it toggles back and forth like this.

I just updated the Pegasus' firmware, but no luck. I have tried with a few different Energy Saver settings in macOS, I'm now using what I think is the most conservative. See screengrab below. Looking for any advice. 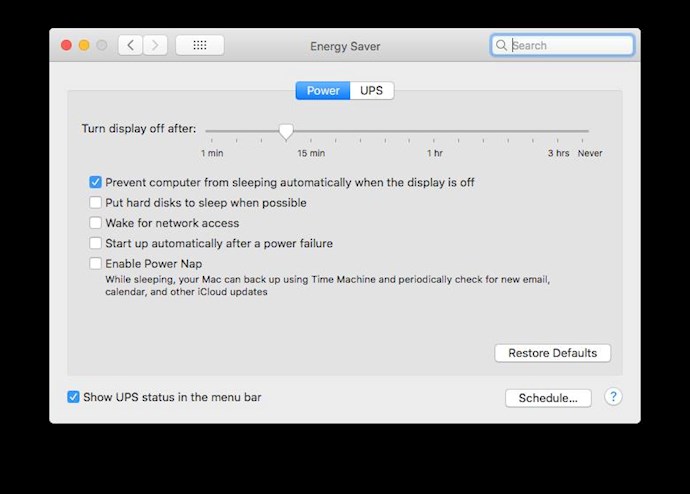