Pegasus2-R6. 1st LD is 5 drives  set up Raid5, all of which are 2TB. The 2nd LD is the last physical drive being used as Time Machine and is also 2TB. I'd like to increase the size of my TimeMachine. Can I change it to, for example, 10TB drive and be recognized as 10TB, or will it only be recognized as 2TB because of the disks in the other LD?

According to the compatibility list, one 10TB has been tested. A Seagate Ironwolf. 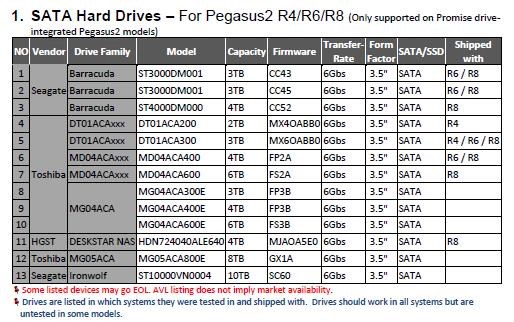 So a new 10TB drive should work, but we can't gurantee compatibility.

New hard drives are different from old hard drives in some aspects. Some new drives have a 4k sector size, there are disks that emulate the 512byte sector (needed by the Pegasus) and these will work. Some 4k drives are 4k only and don't 512e and these drives won't work in the Pegasus. The 2TB disks that came with the Pegasus are probably SATA2, whereas a new disks are probably SATA 3, but they should be backwards compatible.There may be other differences.

Many forum posters have tried large drives in older Pegasus units, up to 14TB as I recall and they have reported that they work fine. So you should probably be OK. But Promise cannot gurantee the compatibility of any untested drive.

Apologies for the late acknowledgement, I thought I was getting anotification when somebody replied.

You can mix and match drive sizes any way you want. You can even mix them within an array, but if you have (3) 4TB drives and (1) 6TB drive, only 4TB of the 6TB drive can be used. If an array has mixed drive sizes, the usable space on all the drives in that array will be that of the smallest drive in the array.

So if you want

It's not a problem.

Thanks RP, I think you've answered my question. My array of 5 disks @ 2TB each for storage, and a single disk array of a larger 'supported' drive size (e.g 6TB) for my Time machine...and the larger size for the Time Machine will be recognized (e.g. all 6TB). Thanks.